Birdo was born in Subcon to a mother named Birdgette. When Birdgette spat the egg from her mouth, Birdo crashed into a hard rock. This collision caused Birdo to have brain damage and make him think he was a chick. When Birdo left Subcon, he bought a bow and pounds of mascara to make himself "pretty". Birdo hangs out in bars to look for unintelligent men to bang. One day he met Yoshi and went out with him. The two married and had a young baby named Yoshi Jr. But soon Yoshi got a divorce with Birdo. Birdo kept the kid and locked him in a cellar underground. Now Birdo stalks Yoshi every minute and never backs down.

Birdo is a stalkerish freak. All he wants is to make love to Yoshi. He is extremely persistent and will stop at nothing to be with Yoshi. Birdo always thinks that Yoshi and himself are perfect for each other and will do anything for Yoshi. Where ever Yoshi goes Birdo follows.

Birdo has no real friends. He and Trooper can often be seen together, but there is little evidence of a friendship. All the other characters hate what he's like and the way he stalks Yoshi. Yoshi hates her for being a stalker and wants nothing to do with Birdo. Birdo, however, loves Yoshi and will stop at nothing to be with him.

Even though almost everyone hates birdo, it is most likely that he was eliminated because she was tricked by Yoshi into losing the challenge for there team. 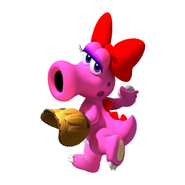