Blooper is a supporting character on The Toad Show and a contestant on Toadal Drama Island. He is a member of the Killer Koopas and is in an alliance with Dry bones, Boo, and Steve.

Blooper was born in Tokyo, Japan at a restaurant named Bloopers-Ahoy. Their main dish, unfortunately for Blooper, was sushi. Before he got cooked up, Blooper inked the chef's face and escaped. Sadly, his family wasn't so fortunate and they were all eaten. Blooper searched for a new place to live. A little bully found him and brought him home. The child flushed poor Blooper down the toilet and he was transported to the Mushroom Kingdom. There he met Toad, Boo, Dry Bones, and Toadette and was happy.

Being an animal, Blooper can only speak in Blooperese, the Blooper language. This language consists of words such as "Bloop","Bleep","Bloo", and "Blee". Some characters are able to understand this language while others can't. Blooper has a bit of a potty mouth. The other characters who understand scold him for using profanity. Blooper is rebellious and rarely follows instructions or orders. He is a huge fan of desserts, his favorite being banana fudge sundaes, and seems to often get exploded by Bob-ombs. Blooper is kind of unlucky but is nowhere near as unlucky as DK and Daisy.

Blooper has a good group of friends. Toad, Toadette, Boo, and Dry Bones, along with him, form the Toad Gang. They love Blooper like another brother. Dry Bones acts as his mentor, trying to guide him down the right path. Steve is also one of Blooper's closest friends. They form an alliance together, further evidencing their friendship. A friendship between Him, DK, Iggy, and Luigi is also evident, for they are often seen together on Toadal Drama Island. A friendship between DK and Blooper makes sense since the two are very unlucky. DK even says this in TDI when in The Sucky Outdoors he replays to Peach's orders by saying "Why would you sent us to do it when you know we die way to much?". Kamek is Blooper's only real enemy seen. Kamek is disliked for ruining fun for Blooper and his comrades. 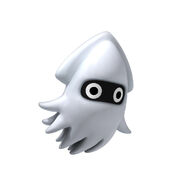 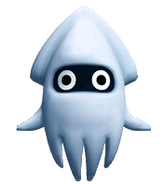