Daisy was born in Sarasaland. Her mother, the queen, died during child birth. Being alone, Daisy was forced to raise herself. She became an expert at thriving and surviving in the desert. Daisy learned many skills but the one key skill that she never learned was common sense. Her friend, Peach, took her in after being told about Daisy being alone in the desert. Daisy agreed to live with Peach and handed her kingdom over to Tatanga who destroyed Sarasaland. Since then Daisy has been a main part of the Mario gang and always has fun with them.

Daisy is a dumb brunette. Due to her living in the desert for most of her life, she never learned book smarts or common sense. Daisy can be easily mislead which is why she made a great member of Mario's alliance. She has many skills in survival but is a very unlucky person. Similarly, to DK, Daisy dies often and is a very unlucky character. Daisy strongly believes in female rights and thinks they can do anything males can. Despite being dumb, Daisy can tell when she's being used. It did take a little while but she did realize Mario was using her as a pawn in his alliance. Daisy can be annoying to characters like Steve and Kamek but they usually forgive her. She also hates bears since one mauled her on Toadal Drama Island.

Daisy has close friendships with the entire Mario gang other than Mario himself. Peach, Luigi, and Yoshi are her buds. She and Peach are great friends although they often argue. Luigi thinks Daisy is super cool and is going out with her, they also had two kids Baby Luigi and Baby Daisy. DK also enjoys hanging with her because they both die often. One of her other close friends is Steve. Steve can be bugged by her but he grew close to her and now the two are friends. She has a few enemies. Mario is an enemy due to the way he used her in Toadal Drama Island. She might be retard but she also dislikes the way he treats Peach and Luigi. Bowser is her enemy due to his constant need to abduct Peach. Wario and Waluigi perv on her, making them enemies also.

During the challenge, she was using the epic gun. Mario pushed her into a bear which mauled her and ate the epic gun. Toad was very depressed by the loss of the epic gun. So he rigged the votes so that Daisy would go. Steve was meant to be eliminated. 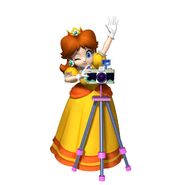 Daisy in Mario & Sonic at the Olympic Games 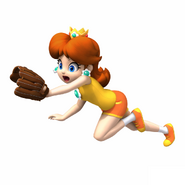