Dry Bones is a protagonist on The Toad Show and a contestant on Toadal Drama Island. He is on the Screaming Shy guys and has an alliance with Boo, Steve, and Blooper. He also has a second consisting of Boo, Bowser, and Trooper

Dry Bones was formerly a Koopa, until one day when Mario was trying to save Peach in one of Bowser's castles. Mario stomped him and knocked him into a lava pit. Dry Bones burned into a skeleton. A 1-up fell into the lava pit and revived him before dissolving. Sadly, since the mushroom wasn't whole, it only revived his skeleton. None of the other koopas liked him because he was different. So he wandered the Mushroom Kingdom in search of friends. Eventually he met Toad and the gang and finally got the friendship he desirved.

Dry Bones is one of the more complex but normal characters. Dry Bones seems to act simply as a normal guy would. He's kind and careing towards his friends. Dry Bones does have a slight temper, but not a very large one. He does like to kill animals, as seen in Toad Wood Idiot, but this is normal male behavior. Dry Bones has a much deeper side to him, showing actual emotion over the other characters lack of it. He will develop into an even deeper and more complicated character.

Dry Bones has more close friendships than other characters. His best friend, and girlfriend, is Boo. He sees her as the only sane thing in the series, this is nearly true too. Boo and Dry Bones hang out all the time and have a very happy and healthy relationship. He has risked his life to save her and would do it anytime. Blooper is also a good friend of Dry Bones. Dry Bones can get annoyied by Blooper's foul mouth and tries to help Blooper with it, however Blooper rarely listens to him. Toad and Toadette were his first friends after the incident and he cherishes them alot. Lastly is his friends Steve and Petey. Petey is a bud to him because he is just a cool guy, and he likes Steve because Toad is a friend of Steve also. As for enemies, Dry Bones doesn't have many. He has an issue with Mario and Kamek for obvious reasons, but he also is enemies with Larry. Dry Bones seems to hate him but no reason is truely given. It may be because of how strange Larry acted on the first day. 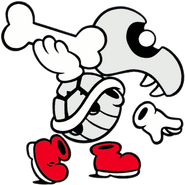 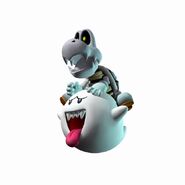 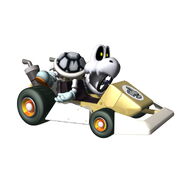 Dry Bones with his Bone in Paper Mario

Dry Bones Sprite in Maro and Luigi Partners in Time