Iggy Koopa is a supporting character on The Toad Show and is a contestant on Toadal Drama Island. He was a member of the Killer Koopas until he became the 9th voted off of the show.

Iggy Koopa is Bowser's fourth oldest child. He was born to Klara Koopa whom Bowser met at a bar, she was the mother of two of Roy's other siblings. Iggy nursed Bowser's troops for him and helped them stay alive. He also raised Chain Chomps for his father. To decide which world his children would get Bowser set out seven items infront of them. A Pipe, An Ice Cube, A Cloud, A Giant Plush Goomba, A Pail of Water, A Jar of Sand, and A Blade of Grass. Iggy chose the Plush Goomba because of his love for minions and animals. He recieved Giantland from his father. In New Super Mario Bros. Wii, his father gave him a new land to rule, Jungleland, after giant land was torn apart by a Giant Chain Chomp Iggy had been training to roll over.

Iggy is the loner of his siblings. Rather than play with his koopa brethren, he'd rather play with animals. He spends hours of his life in the forest caring for animals and training them to help him with things. Roy beats him up most for being such a nerd. Iggy is cowardly and screams alot, much louder and frequent than other character's scream. Iggy wishes to be a star and wants people to see him on TV and cheer.

Iggy is a very friendly character and has many friends to show for it. Lemmy and Ludwig are his closest brothers. Lemmy is Iggy's closest friend and the two hang out together often. Iggy is slightly jealous of Ludwig's knowledge and wants to be as smart as him but the two are still friends. Petey also likes Iggy very much and Iggy takes care of the big plant. Unlike the other Koopalings, He has a good friendship with his Froggaling counterpart, Nick. He can also be seen standing near DK, Blooper, and Luigi implying a possible friendship. As for enemies he has Roy who often beats him up and hurts his feelings. Also the entire Killer Koopa team most likely dislikes him for cursing them. 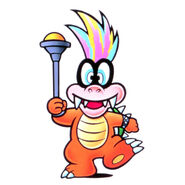 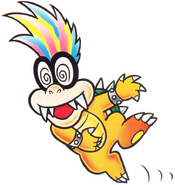