ILVG Wiki
Register
Don't have an account?
Sign In
Advertisement
in: Antagonists, Koopas, The Toad Show Characters,
and 3 more

Kamek is a main antagonist of The Toad Show. He is set to appear as a contestant on Toadal Drama Action when it premieres after Toadal Drama Island ends.

Kamek is the son of Kammy Koopa, King Morton Koopa's henchwoman. King Morton died and Kammy resigned. Kamek decided to be the new King's henchmen. This new King was Bowser. Kamek helped raise the young king into an evil and disgusting monster. But Bowser never listened to Kamek. He would stomp on, bite, and abuse the magikoopa no matter what he tried to do. Since he never followed Kamek's orders, he never truely became evil. Now Kamek is an old, grumpy magikoopa, following Bowser's every wim.

Kamek is a villian. Unlike Bowser he will not hold back. He wants the whole Mushroom Kingdom burned and all it's residents six feet under. Kamek aids the Koopa king in all his plots but never truely agrees with them. If Bowser listened to Kamek more, he might have had a chance at winning against the Mario Bros. Kamek's cold and calculating attitude doesn't fit well with Bowser's dumb and unvillianous one. Most of Kamek's plans involve violence and murder. He loves causing issues for Toad and his gang also, as Kamek has found that Mario is not a real threat but Toad is. He is grumpy like his boss and has his own group of kronies, Oddball, WackJob, and Screwball.

Kamek has negative relationships with every protagonist. Toad is, however, his greatest adversary. He sees Toad as a true threat and Mario as only a distraction from the true threat. So because of this, Kamek fights Toad's gang in every Toad Show special. He also is an enemy of Mario and his friends for being with Bowser. His friends constist of The Koopa Troop, but even there his relationships are weak. He raised Bowser since he was a child and cared for him, but Bowser doesn't like his mean and evil personality. Trooper is a fellow commander of The Koopa Troop but Kamek always acts cooler than him and makes Trooper look stupid. Mowhawk is the only commander that Kamek respects as both characters have truely evil plans. His kronies are simple pawns to him and he gives no care to them. 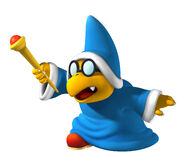 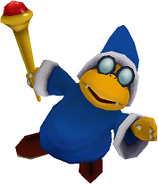 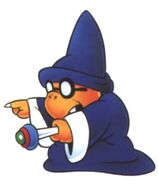