Larry Koopa is a supporting antagonist on The Toad Show and a contestant on Toadal Drama Island. He is a member of the Killer Koopas and is in an alliance with Wendy and Mario.

Larry is Bowser's youngest son. He was born to a drug addict koopa woman. Larry fell into a pile of plants one day after being pushed out a window by Roy. They broke his fall and saved him. Bowser set out 7 objects to decide which world his chidren would rule over. A Pipe, An Ice Cube, A Cloud, A Giant Plush Goomba, A Pail of Water, A Jar of Sand, and A Blade of Grass. Larry got last pick and recieved the blade of grass. He got Grassland which his father told him was the greatest world.

Larry is a kleptomaniac. He'll steal anything not tied down and even that! He's a master pick-pocket and con-artist. His favorite thing to steal is money and gold however he will take anything he can get his dirty claws around. If he goes to long without stealing he'll go completely insane and steal everything in the world. Another thing about Larry is his love of plants. Larry loves raising and planting his piranha plants. He teaches them to sing hard metal songs. Larry can be a freak sometimes and is seen by other characters as a wierdo.

Larry has a few friends but very little due to him being a freak. Wendy and Morton are close to him, much closer than his other siblings. He and Wendy team up in Toadal Drama Island. Bowser hates him and he is one of Bowser's least favorite children. Peach hates Larry for being a creep and sniffing her constantly. Luigi and Yoshi dslike this too. Larry is often beaten up by Roy and dislikes him for that too. Dry Bones strongly dislikes him for no particular reason, he just does. Boo agrees with Dry bones on this. 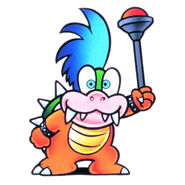