Lemmy Koopa is a supporting character on The Toad Show and a contestant on Toadal Drama Island. He is a member of the Killer Koopas and is in an alliance with Ludwig and Iggy.

Lemmy is Bowser's second oldest child. He was born to Klara Koopa whom Bowser met at a bar, she was the mother of two of Lemmy's other siblings. Lemmy developed a love for ice when one day his father threw him outside in the cold weather for being an annoying brat. To decide which lands he would have his kids rule over Bowser lined seven objects in a row. A Pipe, An Ice Cube, A Cloud, A Giant Plush Goomba, A Pail of Water, A Jar of Sand, and A Blade of Grass. Lemmy licked the ice cube and got stuck to it, giving him Iceland to rule over.

Lemmy is the goofball clutz. He likes having fun and doesn't care what people think. Lemmy hurts himself often and can be very unlucky. It is rare for him to die but he is often hurt constantly. Roy is mean to him and bullies him most of the time. The two compete against each other to gain their siblings love. Lemmy enjoys frozen things like ice sculptures and snowballs. He will play in the snow for hours. His love for ice and the cold makes him an excilent match for Iceland.

Lemmy has many friends due to being a kind and modest koopa. His closest friend is his brother Iggy. The two are both the kindest of the Koopalings. Ludwig also likes Lemmy much more than the other Koopalings. Bowser likes Lemmy less than Ludwig, Roy, and BJ but more than Wendy, Morton, Iggy, and Larry. All of the Killer Koopas are Lemmy's bud and appreciate his efforts for the team. His main enemy is Roy whom he competes with for his siblings affection. Roy also bullies Lemmy often. Mario is his only other enemy because Mario hates Bowser. 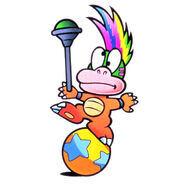