Ludwig Von Koopa is a supporting character on The Toad Show and a contestant on Toadal Drama Island. He is a member of the Killer Koopas and is in an alliance with Lemmy and Iggy.

Ludwig is Bowser's eldest son. He was born to Kacy Koopa who Bowser met at a BBQ. Ludwig learned how to speak at 6 months old and began inventing soon after. Bowser found his sons talent to be very useful in getting the princess. To decide which lands he would have his kids rule over he lined seven objects in a row. A Pipe, An Ice Cube, A Cloud, A Giant Plush Goomba, A Pail of Water, A Jar of Sand, and A Blade of Grass. Ludwig chose the pipe and was chosen to take over Pipeland as his world. He happily navigated all the pipe mazes with perfect accuracy, making it an ideal world for him. Roy traded him Skyland in New Super Mario Wii but they switched back afterwards.

Ludwig is a genius. He can build nearly every invention possible. His IQ far surpasses that of a majority of the other Toad Show characters. He uses big words that confuse the other characters. Ludwig's inventions are often used by both sides of the war. Bowser loves to use his inventions as does Toad for simple amusement. Rarely do his inventions fail however they can on ocassions. Ludwig has great computer skills also, and can hack into nearly any machinery and reprogram it. He does seem dumb on ocassion and isn't as mature as he could be, but this is just him letting lose. Another fault of Ludwig is the way he adds self destruct buttons and weak points to nearly every machine he makes, these flaws are usually by design however.

Ludwig has good friendships with his brothers Iggy and Lemmy. Bowser also likes Ludwig much more than many of the other Koopalings. He also has good ties with the rest of the Killer Koopas like Yoshi and Petey. Ludwig's primary nemesis is E. Gadd. As the two are both scientists they are huge rivals and will stop at nothing until they win out against the other. Ludwig even went as far as to purposely sabatoge E. Gadd's machine in Toadal Drama Island so that E. Gadd would be eliminated. Another one of his enemies is Mario who he just hates in general. He also, more than others, uses DK as a slave. Lastly he is an enemy of Roy because of his betrayal on Iggy whom Ludwig quite liked. 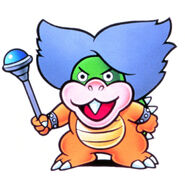 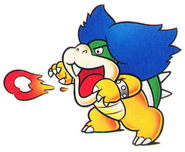