Luigi was born just seconds after Mario. While in school, Luigi helped Mario get by 1st-3rd grade. He helped Mario with homework and making friends. Sadly, Mario turned on his brother and went to the popular side. After that, Mario bullied Luigi every chance he received. He and Mario grew up and became plumbers. They owned The Mario Bros. Plumbing Service. During a job, Mario and Luigi were sucked into a pipelike toilet and transported to The Mushroom Kingdom. Seconds before getting there the Princess had Just been abducted by Bowser. Mario told Luigi to wait there while he went to save her. Mario saved her and left Luigi behind. After that, Luigi was overshadowed by Mario. Luigi was seen as little more than a sidekick. Not even all the Mushroom Retainers knew his name. Will Luigi ever step out of his brother's shadow or will he be stuck watching Mario get everything while he gets nothing?

Similarly to to Yoshi, Luigi is much less happy than his Mario series counterpart. Luigi talks with an emotionless tone and is very gloomy. He is very spiteful to Mario for being overshadowed by him. Other than this, Luigi is undeveloped. Little personality traits have been sprinkled onto him but just seem to be thrown away. He has been shown to be cowardly and quirky but these are shown in only short bursts. Luigi is also one of the smartest characters on The Toad Show and actually has common sense. Roy threw a rock at Luigi's head which was meant to change his personality to a happy Luigi. His happy personality disappeared soon after though.

Luigi's closest friends are Yoshi and Peach. They hang out in most of the videos and share hatred for Mario. Peach thinks he is a cute guy and that he is much nicer than Mario. Luigi is in a band with Toad, Steve, and Turtwig. He interacts very little with Toad, so their relationship is unknown. Daisy and Luigi are going out. He thinks she is a very cool girl and they had two kids, Baby Luigi and Baby Daisy. Petey are Blooper are like his kids, he quizzes them and teaches them how to do the right things. Luigi is seen standing next to Donkey Kong and Iggy, implying a possible friendship between the three. Bowser, Trooper, and Kamek are three enemies of Luigi. Despite often disputing with Mario, they can agree that Bowser is a truly evil. Kamek and Trooper are his enemies to to their allegiance. Luigi's greatest enemy is in fact his brother, Mario. Mario ruined every aspect of Luigi's life. His career, His education, His friendships, and even his love life. Mario bullied Luigi for his entire school career. He made other kids hate him by making up lies about him. He told embarrassing stories to girls Luigi liked. Mario stole Luigi's spotlight and destroyed his life. Luigi also has a small conflict with King Boo. 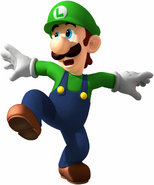 That's Mama Luigi to you Mario!
Community content is available under CC-BY-SA unless otherwise noted.
Advertisement