Monty Mole is a supporting character on The Toad Show and a contestant on the upcoming series Toadal Drama Action.

Monty was born on a farm somewhere in the Mushroom Kingdom. He had to find a new place to live when all the carrots were poisoned by farmers to kill off the moles. Larry employed him into the Koopa Mine Company, where he dug up diamonds and gold for the Koopa Clan. Monty was injured in a bob-omb explosion and was let go. He made a hole in darkland and made it his home. Soon after he met Petey and Wiggler and had a bunch of new friends.

Monty is a hill-billy mole with a nack for digging and gardening. He has a redneck accent and is seen to talk very slowly. Monty scolds his gang, similarly to Toadsworth, and acts as their father figure. He is an amazing gardener and can grow anything. He learned how to garden by watching farmers on the farm when he was young. Monty is slightly cowardly and digs whenever he is scared. He has a very hardworking personality and works 24/7. Even when he's asleep he works on his garden. 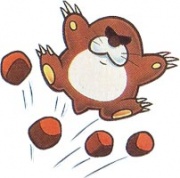 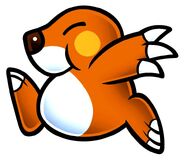 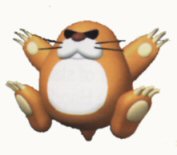