Morton Koopa Jr. is a supporting character on The Toad Show and a contestant on Toadal Drama Island. He was a former member of the Screaming Shy Guys until he became the 5th person voted off in The Sucky Outdoors.

Morton is Bowser's second youngest son. He was born to a Koopa woman whose name Bowser never even bothered to find out. He was very drunk at the time. Bowser set out 7 objects to decide which world his chidren would rule over. A Pipe, An Ice Cube, A Cloud, A Giant Plush Goomba, A Pail of Water, A Jar of Sand, and A Blade of Grass. Morton devoured the jar of sand and recieved Desertland. He traded with Roy in New Super Mario Bros. Wii and got Pipeland which he turned into Metalland.

Morton, Wendy, and Larry were working together to gain revenge on his father. He is eliminated due to the way the others feel about Morton.

Morton annoyed his entier team to the brink of insanity. His father was particularly annoyed with Morton and plotted his elimination. He made a bear call that attracted a bear to the campsite, further angering his team. As a final act of vengence, Morton annoyed the living crap out of the team until he was eliminated and sent to the Dock of Shame. There he cried at his sister's feet until Bobei dragged him off. 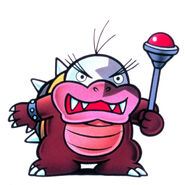 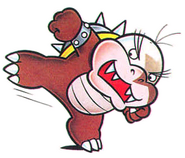