Petey Piranha is a protagonist The Toad Show and a contestant on Toadal Drama Island. Petey is a member of the Killer Koopas and has no alliance so far.

Petey was once a regular piranha plant. He lived with a botanist named Izzy Koopette. She used him in her crazy experiments on plants. One day, she gave Petey a metal rod and put him outside during a lightning storm. He got electricuted and morphed into the Piranha plant he is today. Izzy turned him into her personal slave. Petey escaped Izzy one night when she smoked too much weed and passed out. Bowser took Petey in and made him the leader of the prianha plants. Petey battled Mario and lost, but after his first defeat he decided to quit the Koopa Troop. Bowser was fine with this though he was sad to see Petey go. Mario and Petey did have a few more run ins but these were only when he got in Mario's way. Petey wandered the Mushroom Kingdom for a new home. One day he sat down in a garden and ate some carrots. The carrots belonged to Monty Mole. To prevent Monty from stabbing him in the head with a pitch fork, Petey told Monty that he knew how to make carrot cake, a recipe that Monty was inable to make. Monty and Wiggler agreed to let Petey stay with them if he made them carrot cake once a week. Now he lives with them and they are the three greatest pals of all time.

Petey has many mental disabilities, which he got from getting electricuted. These disabilities make him extremely random and spontaneous. Petey will often scream random phrases like "I can flack the majjigger". When he's stressed he will scream eratically until he fells better. Petey also likes to sing famous pop songs to cool himself down or just for fun. Petey is pretty gluttonous, eating pound of food in a single sitting. The food he eats is often healthy food such as carrots and corn. When Petey over induldges on sugar, He'll go crazy and kill all those around him. Petey is very fond of two different celebrities, Micheal Jackson and Joe Biden. He likes Micheal Jackson better than Joe Biden, even giving adoption requests to MJ. It is said that MJ and Petey did it once. Joe Biden has been an idol to petey ever since he saw him in The Koopalings Meet the Froggalings.

Petey's best friends are Monty, Wiggler, Majjigger, and Froggy. As said in his bio he met the first two while wondering around the Mushroom Kingdom. He makes them carrot cake so they aren't angry for him stealing their carrots. As for his Majjigger, he met him in pipeland. Petey saved him from a piranha plant who was trying to devour the poor creature. Froggy became Petey's friend when he and Monty found him in a pet shelter. Nearly everyone else on this show loves the plant. Toad sees Petey as one of the greatest Toadal Drama Island contestants. Petey and Bowser often team up and have a good relationship. Luigi, Peach, Yoshi, and Daisy all also like Petey. The only people who dislike him are Kamek and Mario. Kamek dislikes him for when he foiled Kamek's plot in Party of the Century, and Mario hates him because he's annoying, though this doesn't stop Petey from being excessively friendly to him. Overall Petey has the highest friend count on the series. 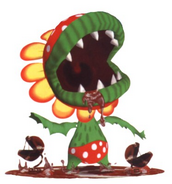 Petey and his Minions in Super Mario Sunshine 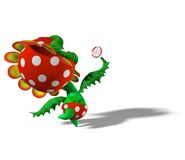 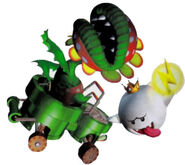 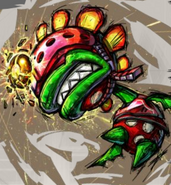 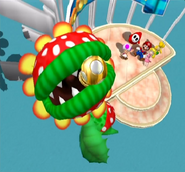 IMMA EAT U UP KIRBY