Princess Peach is a protagonist on The Toad Show and a contestant on Toadal Drama Island. She is on the Killer Koopas and is in an alliance with Yoshi and Luigi.

Princess Peach's birthplace and true family are unown. The Mushroom Retainers were searching Iceland for penguins when they found her frozen alive. The king, who needed an heir, adopted Peach so that one day when he died someone would take his place. Eventually that day came and she became queen. Years later, she was abducted by Bowser and was saved by Mario. He saved the Princess many times after that, getting greedier and meaner with every rescue.

Peach is the queen of the Mushroom Kingdom and acts like it. She is very bossy towards other characters. Peach is also persistant, not quiting until she gets what she wants. Other than that, Peach is a rather undeveloped character. She has few speaking roles in the episodes and is rarley funny. Her voice actor, Emoevan7, also dislikes the character. He said she was his least favorite character to act for and is rather bored with the character. Peach is a very important character she's just very under developed.

Peach is on good terms with nearly every character. Toad is her close bodyguard to Peach and is willing to die for her. Yoshi and Luigi are considered her best friends and they hang out all the time. Toadsworth took over as her father once king Toadstool died. Her and Bowser were formerly enemies until their truce in Party of the Century. Even before the truce she never really saw him as a villian, just as a lovestruck koopa. Her and Daisy argue often but are good friends. Peach's relationship with Daisy is unown, She is said to be a friend, sister, and a cousin. Which of these is their true relationship is a mystery. Her only enemies are Mario and Kamek. Mario is abusive to Peach and uses her as a "rapebag". He also uses her for money purposes as well, changing her will so that he would gain all her money when she dies. Peach dislikes Mario but Mario loves her. As for Kamek, he not only can't accept Peach and Bowser's truce but also doesn't realize Bowser's motives. Bowser wants to marry Peach but Kamek thinks he wants to kill her. This can cause obvious communication issues. Wario and Waluigi perv on her and she strongly dislikes the bros. 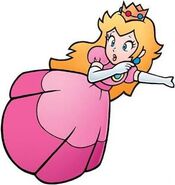 Peach with her Parasol

Peach in Mario & Sonic at the Olympic Winter Games
Community content is available under CC-BY-SA unless otherwise noted.
Advertisement