Roy Koopa is an antagonist on The Toad Show and is a contestant on Toadal Drama Island. He is a member of the Killer Koopas and has no alliance.

Roy Koopa is Bowser's third oldest son. He was born to Klara Koopa whom Bowser met at a bar, she was the mother of two of Roy's other siblings. Roy secretly liked pretty things but hid this behind his brutal and mean attitude. To decide which lands he would have his kids rule over Bowser lined seven objects in a row. A Pipe, An Ice Cube, A Cloud, A Giant Plush Goomba, A Pail of Water, A Jar of Sand, and A Blade of Grass. Roy thought the cloud looked pretty and chose it. Bowser gave him Skyland. He gave Skyland to Ludwig to get Pipeland and then traded Pipeland to Morton to get Desertland in New Super Mario Bros. Wii, but they all switched back afterwards.

Roy is the toughest and meanest of his koopa siblings. He beats on siblings and minions alike. Roy works out everyday by beating up on Lemmy, Iggy, and Larry, but his strength mostly generates from his pounds of steroid filled needles pilled in his room. He is intensely brutal and merciless towards his victims and has learned to breath fire. However despite looking, acting, and outright being strong, Roy is very cowardly and babyish. He'll often cry or beg for mercy when faced with a near death situation. He also can't take much criticism. Roy loves bunnies and pretty things also, further making him less manly.

Roy is a very mean koopa and has few friends. His little sis, Wendy, acts as his right hand woman. He is also Bowser's second favorite kid, behind BJ. Other than Wendy and Bowser, Roy has no friends. Petey likes him but the feeling is not mutual. He often beats on the other characters which causes them to hate him. Lemmy, Iggy, and Larry are his most frequent victims. He also beats on other nerdy characters like Luigi. 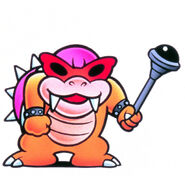 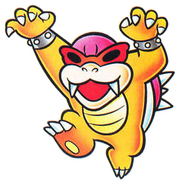