ILVG Wiki
Register
Don't have an account?
Sign In
Advertisement
in: Protagonists, Mascots, The Toad Show Characters,
and 6 more

Toad is the main protagonist of The Toad Show. Toad is also the host of Toadal Drama Island. He works for peach as a mushroom retainer, basically the royal guard. He is best buds with Dry Bones, Boo, and Blooper.

Toad is very idiotic, simple as that. His mushroom cap takes up most of the space his brain should. Toad pretty much suffers from nearly every mental illness including Autism, ADHD, and Alzheimer's. He is a very friendly and carefree individual. The best character to compare Toad to is Sponge-Bob. Toad can be annoying to other characters such as Mario, Steve, Bowser, Kamek, and Donkey Kong. He is also a little pervy, hiding naughty magazines in his bed and stripping down naked often. On Toadal Drama Island however, he shows a slightly altered personality. He is narssassistic and uncareing, often placeing himself over the contestants. Toad yells alot more than he does on the real show and the characters like him less. Boo states that "Fame has totally gone to his head." in the first episode, showing that in states of high power Toad will become more mean and bossy.

Toad was born into a large family of 8, Himself, Toadette, His 4 brothers, Joe, Andy, Dan, and Jack, and his parents. One day at the annual Toad BBQ, Toad's father poared about 27 gallons of gasoline onto the grill. This obviously triggered a ginormous explosion, which disintigrated his parents and blasted his brothers into space. Toad and Toadette decided to go their seperate ways, Toadette taking a good path and Toad taking a criminal one. He became a massive drug dealer, selling shrooms for $300 a pound. He did this for years until a policeman arrested him, However he did buy a few pounds of mushrooms before cuffing our hero. Toad was put in a reformatory for a year until one day when Princess Peach let him free. He became her personal body guard. Sadly the little guy gained many mental issues and lost a dynamic amount of brain cells from his years of eating shrooms. Peach hired Toadsworth to provide Toad with the thearapy needed to return to normal. Toad never turned back into the mushroom he once was, but he did become a very happy and loyal guy again. ﻿

Toad has many close friendships. Boo and Dry Bones are by far the closest of them. They formed a group of buddies. Blooper and Toadette later joined this group. These guys are the few people toad never annoys, though they are annoyied by him slightly in TDI. Toadette is his younger sister, but Toad has a crush on her. She reminds him constantly of this. Toad also has a currently unamed band consisting of his roomate, Steve, Luigi, and Turtwig. Steve is annoyied by Toad. They kind of have a Squidward-Spongebob relationship. Peach is his kind boss. He likes her and she likes him. He will do anything to protect the Princess. Petey's gang and Yoshi also has a bond with the mushroom.

While Toad has many friends that's not to say he has no enemies. Mario is his role modle but Mario sees Toad as a pest who has no idea what castle the princess is in. Toad tries to be cool like Mario but it rarely works. Bowser is also a primary enemy of Toad. Though they can work together, Toad usually puts Peach first and saves her from Bowser. However Bowser does prefer Toad over Mario because Toad is more gentle. Trooper is also an enemy, though mostly because he is with Bowser. Kamek is, however, Toad's greatest enemy. Kamek constantly tries to ruin the fun for Toad and his friends. Kamek even went as far as to kidnap Peach so that Bowser wouldn't become her friend. He also has a small conflict with Wario, Waluigi, and Toadsworth. 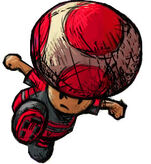 Toad about to die in Mario Party 5 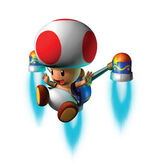 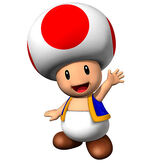 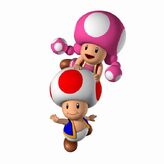 Toad and Toadette in Mario Party 7 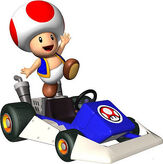 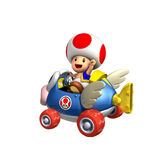 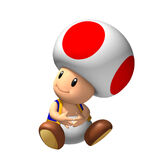