ILVG Wiki
Register
Don't have an account?
Sign In
Advertisement
in: The Toad Show Characters, The Toad Gang, Protagonists,
and 2 more

Toadette is a protagonist on The Toad Show and is the chef on Toadal Drama Island.

Toadette's family consisted of Toad, Her Parents, and her other brothers, Joe, Andy, Dan and Jack. At the annual Toad BBQ, Her father poared too much gasoline on the grill. This caused an explosion that killed her parents and launched all her brothers, but Toad, into space. Toad and Toadette went seperate ways. Toadette went off to college and Toad went to drug dealing. She studied to become a doctor. Sadly, she never became a doctor because she didn't study hard enough and she wasn't bright enough to be one. So Toadette decided to work for Peach. There she reunited with her brother and met many new friends.

Toadette is a very changing character. On most episodes of The Toad Show, Toadette was supposed to be portrayed as being somewhat quirky. This is what ILVGwebmaster planned for her personality to be but she hasn't really shown it. She got little developement on The Toad Show however. Toadette seemed like a nice and smart girl but she only seemed that way and was never really shown that way. Toadal Drama Island developed her personality more since she was the chef. She was shown to be utterly murderous and brutal. Toadette threatens to stab and kill most of the contestants. This differs greatly from her Toad Show personality. She is less happy in Toadal Drama also and seems to be bored most of the times.

Toadette's relationships differ between shows. In The Toad Show all the characters are her friends except for Kamek. Kamek ruins stuff for her and her friends so she dislikes him. She also hates Mario for being a jerk to her friends. Her relationship with her brother Toad is very strange. His years of drug abuse made him fall in love with Toadette and forget she was his sister. Toadette constantly reminds him of this but he never listens. On Toadal Drama Island however her relationships are far different. She is disliked by most, if not all, the contestants hate her. She hurts and kills alot of them. The interns also dislike her because she beats up them alot. 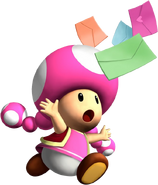 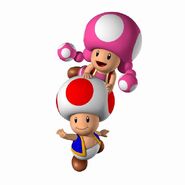 Toadette and her bro, Toad, in Mario Party 7 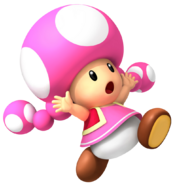 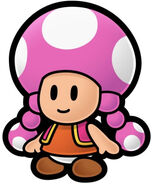 Paper Toadette in Paper Mario and the Thousand Year Door