Trooper is a fan character created for The Toad Show and a contestant on Toadal Drama Island. He is a member of the Killer Koopas and is in an alliance with Bowser, Boo, and Dry Bones.

Trooper was born to a wealthy koopa family. In High School, Trooper was the MVP in nearly every basketball game and was one of the most popular kids in school. Everyone wanted to be friends with him but of all the choices he had he chose Bowser, the biggest nerd in the school. Everyone was mean to the young king as a child but Trooper had a kind heart and brought Bowser in. That's why Trooper was the only person he kept alive when he ordered Bullet Bills and Bob-omb attacks on the school. Bowser then happily made Trooper his second-in-command.

Trooper is a very kindhearted and cool character. He is alligened with the villian but he isn't really mean. Infact he's actually nice most of the time. He likes being a hero and to help people out. He likes Bowser alot, even worships him, and will do anything to save his leader. Trooper wants to be Bowser's damsel in distress. It is stated that the koopa has a very weak stomach and doesn't like to try new things. Trooper can be seen to have a slight crush on Steve also but mostly towards Bowser. He has a tendancy to tell extremely lame jokes or insults and often says "yeah" or "alright" after Bowser tells somebody something.

Trooper, similarly to Bowser's other minions, doesn't get out a whole lot and doesn't have a large group of friends outside the Koopa Troop. Bowser is his closest and most dearest friend. He worships the guy and even has a gay crush on him. Trooper went as far as to create Bowsanity, a religion where Bowser is the main god. Bowser doesn't like Trooper's obsessiveness over him and often beats him up. He and Kamek have a rivalry over Bowser's affection and Kamek usually wins out. Mowhawk, Bower's Mecha-koopa leader, is a fellow general and the two have a friendship. Steve and Trooper have a strong bond. Trooper refuses to shoot Steve in Paintball Deerhunt, implying a good friendship. Trooper dislikes Mario for tricking him onto his alliance in Toadal Drama Island and he also dislikes the way Mario wins against him and Bowser. Peach, Toad, and other characters dislike him for being teamed up with Bowser and hurt him often. 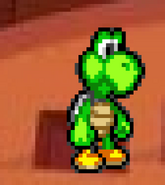 Trooper at an elimination ceremony 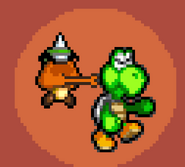 Steve making out with Trooper's ear 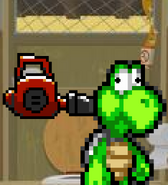 Trooper vaccuming out his ear after Steve licked it 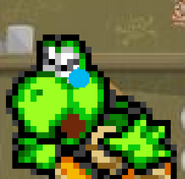 Trooper crieing in the Confessional