Wendy O. Koopa is a supporting antagonist on The Toad Show and a contestant on Toadal Drama Island. She is a member of the Screaming Shy Guys and is in an alliance with Mario and Larry.

Wendy is Bowser's third youngest child. She was born to Kaddy Koopa, who turned out to be half a man. Wendy would constantly yel and pout like a little bratty girl. To decide which lands he would have his kids rule over Bowser lined seven objects in a row. A Pipe, An Ice Cube, A Cloud, A Giant Plush Goomba, A Pail of Water, A Jar of Sand, and A Blade of Grass. Wendy had gotten dirty in the mud earliers so she washed herself off with the Pail of water. Her father gave her Waterland. She pouted that their were too many fish.

Wendy is a brat. She wants everything and everything she has she wants another of. When she doesn't get what she wants she'll throw deadly tantrums until she does. Bowser tries hard to comfort her and tend to her needs bit she never quits. She is very girly and likes diamonds and jewels. Wendy collects expensive and pretty objects in her room. She dislikes most, if not all, people and has few friends.

Wendy is a snotty brat and has few friends. She is Roy's right hand woman and likes him alot. She is also a good friend to larry and Morton because they are all the runts of the litter and are the most hated by their father. Mario and her are in an alliance and are friends too. Other then them, Wendy is disliked by most of the other characters, even her own father hates her. 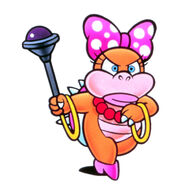