Yoshi is a protagonist on The Toad Show and a contestant on Toadal Drama Island. He is a member of the Killer Koopas and is in an alliance with Peach and Luigi.

Yoshi is the son of the Yoshi Chief, who was the fat Yoshi in Paper Mario. Yoshi's have many clans within their tribe. Yoshi was the leader of his clan which consists of 6 other Yoshis, Blueshi, Redshi, Pinkshi, Yellowshi, Purpshi, and Rainboshi. One day while walking around the beach Yoshi's Clan, known as the Yoshanga Clan, came across a baby who came from the sky. This baby's name was Mario. Mario had been abducted by an evil koopa wizard named Kamek, who also had taken his brother. The clan decided to help the young boy get reunited with his brother. Sadly, due to the child's constant crieing, all the other Yoshi's either went insane or were killed because he distracted them. The ones who went insane were never seen again. Yoshi was the only one who stayed sane. After defeating Kamek, Yoshi went into retirement. He currently resides in Mushroomville, Mushroom Kingdom. During retirement he met Birdo and got married. Only until they had their first child did Yoshi find out Birdo was, infact, a male. Yoshi was quick to divorce and Birdo took custody over Yoshi Jr.

Yoshi is a strange character. His personality is very cheery and happy in the real Mario series, but on The Toad Show Yoshi is portrayed as a depressed glutton. He began binge eating after retirement to deal with his depression. In the specials, Yoshi eats all the other characters food such as The Christmas episode and Party of the Century. He has no prefrences in food but he does enjoy fruit. Yoshi is very sad due to the loss of his comrades. He is constantly avoiding Birdo too, who will never give up his mad love for Yoshi. Yoshi's personality was mostly getting stalked by Birdo until his elimination on Toadal Drama Island, where he got a good chance to develop more.

Peach and Luigi are buds of Yoshi. The Princess sees him as the person he is and not the pet Mario treats him as. Luigi also treats Yoshi as an equal. The three hang out in alot of The Toad Show and Toadal Drama Island episodes. Boo and Dry Bones also are friends of him. As for enemies, Yoshi has a few. His worst ones are Mario and Birdo. Since teh two first met Mario has been ruining Yoshi's life. Mario treats Yoshi as his slave, forcing the dino to give him piggy back rides whenever he wants. Birdo also is in love with Yoshi. He will chase him no matter where he goes, making life miserable. Kamek and Yoshi are also enemies for reasons different than once thought. Many think Yoshi wants to kill Kamek because he stole Luigi, but it is actually because Kamek dropped Mario onto Yoshi and Mario made his life awful. Yoshi dislikes Steve's negative attitude and isn't very fond of the goomba either, makig them enemies also. 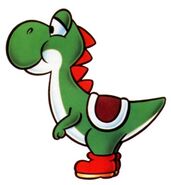 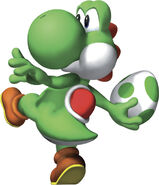 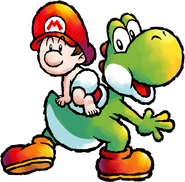 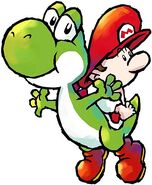 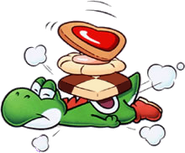 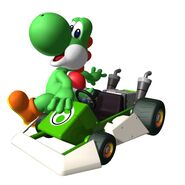 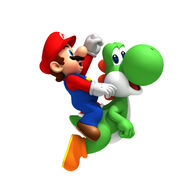 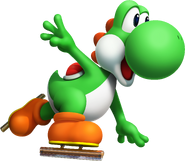 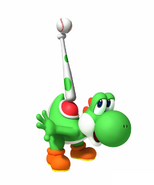 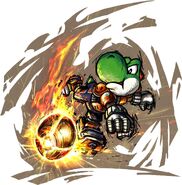 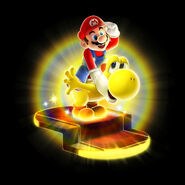 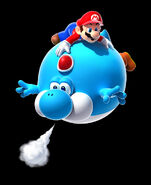 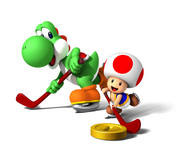 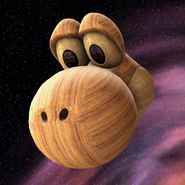